For obvious reasons, there is always a degree of reticence planning a stay of a day or longer in a smaller, unexplored city. Fortunately, Bamberg holds a straight flush of the main things you could think of that make a place great.

As a city of 74,000 inhabitants, Bamberg is approximately the same size as Scunthorpe. However, that coincidence aside, it would be difficult to find two more different towns within 90 minutes flight of each other.

Bamberg boasts the rather obscure fact of being the very first inscription to UNESCO, an institute entirely devoted to preserving and promoting historically significant places and monuments. You would think people would be blazing a trail for it in the same manner they do to nearly every small town in the Loire Valley or the Dordogne, most of which (if you subtract the wining and dining) offer half a day’s interest at most. This city’s inscription covers the entirety of the old town, an expanse of interest which particularly appealed after my last trip to Germany was bookended by a trip to Hildesheim, a city with one fake-historic (albeit very impressive) town square, only a tiny restored oasis of beauty in an otherwise dirty, downtrodden and featureless Scunthorpe of a place. It was clear from cursory research there was plenty of sightseeing to be had. It also made me wonder why Bamberg has become buried under larger more undeserving German cities as a destination, and overlooked by the romantic road/fachwerk town daytrippers who head for the likes of Heidelberg and Rothenburg for their fix of classical architecture and wonky rooftops.

What makes a city great?

There are certain intangible aspects you can’t quite ever articulate about some places no matter how hard you try. However, it’s good to start with the raw materials. I called it a straight flush, right? Well, to labour the card hand theme, here are five aspects I think help make a great city like Bamberg, and indeed any city.

1. Rivers. Any riverside setting is almost always an improvement. The flow of water is a natural respite from the harsh sounds of the city, and feels like oxygen being fed into starved lungs. It’s a place for recreation, for viewing things and furthermore it demands the construction of bridges. No city has ever suffered from a surplus of bridges. Bridges are excellent. Rivers are also a reminder of a place’s historical purpose for existing. The trading, the travel. It also reminds you where the water has come from,where it is going and therefore gives a place a sense of connection. Unlike in Eastern Europe where rivers are often ignored and on the periphery, most Western European towns are either historic or wise enough to have city-planned around the river, making it a focal point. Bamberg is a classic example of this, indeed it goes so far as to put its extraordinary centrepiece, the Altes Rathaus on a bridge over the river. Comprised of a grand tower, a baroque palace, and sticking out on the end, at first glance seemingly dangling unsupported over the river, a large yellow fachwerkhaus. It’s one of those things that really defies existence. You can only see this in Bamberg. Due to the weir, the river rushes past at quite a pace, so much that there are kayak lanes dotting the way. I can’t recall too many cities where the central river has such a strong current. This again gives it a specific character.

2. Hills. Steep-angled pavement and winding streets almost always result in more atmospheric places. It’s the city struggling to tame the surroundings and not quite managing. Whether it’s Bastide towns in France, or Yorkshire Dales villages in England like Howarth and Heptonstall, hills make a huge difference in giving a place a sense of character. Bamberg’s centre is relatively flat on the east bank, however travelling west from the cluster of breweries by the river takes you quickly up the contours and into a series of seven hills, each with it’s own tower and lookout point. The Altenburg is set on the tallest of these, and offers a very attractive 5 mile walk from town and back through parks and woodland, with an extraordinary view of the city along the way. On your walk back you can take a while discovering what is really the undiscovered part of Bamberg, the residential west bank. This area isn’t full of activities per se but the historic housing, undulating winding streets and general prettiness is on another level to many residential areas I can think of. Despite the history all around you, it has the rhythm and local life of an everyday suburb, making it all really, quite special. Especially when it’s Christmas and New Year, and snowing: 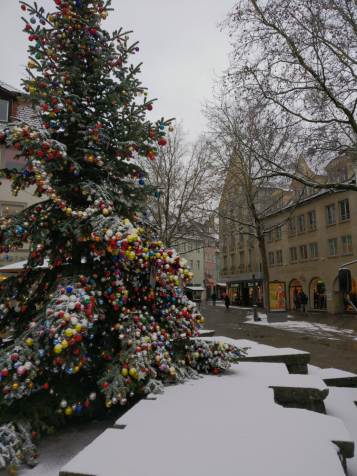 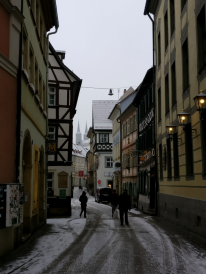 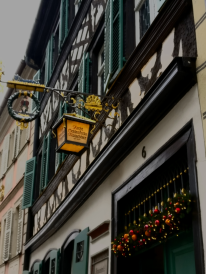 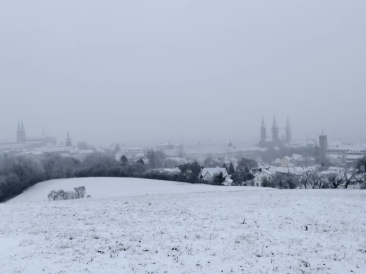 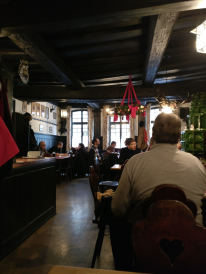 3. A Clear Sense Of What The Place Used To Be

A place which has made its mark in history is a fine thing, but if there’s hardly any of it left to look at, to walk through, to smell, taste or experience, well, you’d be in Coventry. You’d be in Kaliningrad. Some of it can be brought back through restoration jobs, but as they are very difficult, not to mention expensive, you are often left with only a hint and a suggestion of the place’s character, and sometime a distinctly fake ‘Disneyland’ type feel. Everybody wants a real flavour of what a city was like in its high period. This is why events like German Markets are so popular, because of our yearning to experience not only heritage, but social simplicity; things you can easily reach out for, eat, drink and touch. Bamberg evidently had two clear high periods, a high medieval period where it was an important town in the Holy Roman Empire, and a later 18th century period where it became a seat of learning and inherited the piles of baroque and classical architecture it’s sitting on. The Alte Hofhaltung with its superb grand timbered ‘Innenhof’ complex and the nearby Neue Residenz sum both of those periods up nicely, and it’s typical of the city that both are still standing. Because Bamberg’s old town is so large as a constituent part of its whole, a walk from the train station to the Altenburg feels like you’ve achieved a transect through nearly entirely interesting mix of historical architecture, almost becoming better, and better as you go along. It’s a rare thing.

Yes, there’s nothing like this to inject energy and atmosphere to a city. Cities filled with young people are immediately more vital feeling, livelier and less predictable. The demand for amenities and entertainment make every bit of retail space in the centre sought after, meaning it’s far easier to find things to do when you want to do them. Bamberg would otherwise turn into a granny-fest like the brilliant, but undeniably pensioner-stricken Goslar , a city I wrote about back in June 2016.

5. A preserved unbroken chain of brewing, pubs and nightlife offering something unique.

A vast amount of holidaying and travelling should be spent absorbing local nightlife and local brews. It is almost a test of any place worth a damn. If a town’s residents can’t be bothered to congregate and spend time with each other then what do you have left? A dormitory where people wake up, get in their cars, drive to work and return home without having made any input into the city they call home. People sneer at the admittedly drab working men’s clubs and shitholes dotted around the place, but everyone in them is contributing to their town’s identity more than many of you are out there. Places without local life are vacuous and pointless dormitories. Pleased to inform you Bamberg is about as far away from that as you could imagine.

Bamberg offers nine (9) independent breweries in the altstadt alone (I put the digit in there a la the final score vidiprinter for when people need to rub their eyes). I don’t need to tell you that’s rare, going on unique. These breweries aren’t closed doors sold-elsewhere places either, these are German brauhauses also offering their own pub, and usually their own restaurant with it. The jewel in the crown is Aecht Schlenkerla‘s pub, in every single way one of my favourite public houses and the epitome of an atmospheric, authentic, and traditional style pub. Dark wood, beams, a window-hatch for serving, gravity pulled beer direct from the barrel, roaring fire, shared seating, friendly locals, and the unique rauchbier.

Rauchbier must be among the most acquired of all beer tastes, being as it is, smoked, something most people are familiar with powerful tasting meats and cheeses, not so much liquids (though there is the smoked tequila Mezcal my girlfriend has introduced me to). Rather like kissing a smoker for the first time, I must confess on a first tasting there is an initial urge to recoil as the smoke flavour engulfs your mouth. Locals assured me that it takes 3 pints of smoke beer to get used to it, and after that it’s fine. I did manage to cross that threshold, though over the course of 2 years preceding this visit, meaning I wasn’t entirely sure what to expect! However, the standard Marzen rauchbier is very nice indeed, perfect for a winter beverage, being hearty, thick and brown with a lovely aftertaste that invites you to dive in and have more. It’s a peculiar flavour but one you very quickly get used to, much as I suppose the Germans would find with English Bitter.

Luckily for the timid there is the usual array of local Pils to try, along with some interesting other beers, as Franconia is famous for its Kellerbier, a delicious unpasteurised and unfiltered ale second only to Hefeweizen in my opinion, as the German’s finest contribution to brewing.

Food-wise, you are deeply ensconced in Wurstland, people. Franconian food starts with sausages and sauerkraut, and everything else is relegated to second place. Most food orders simply involve barking a number at a middle aged woman in a milkmaid’s outfit who will return in due course (usually 5 minutes max) with that quantity of sausages. The Bambergerwurst is a medium sized and thickness grilled sausage, and you can eat this at Schlenkerla’s cloistered banqueting hall from a metal plate with your smoked rye bread and sauerkraut studded with bacon rind. It’s like dining directly from the Middle Ages. Agricultural, and with a flavour profile you won’t even need to remember because you’ll still be tasting the aftertrails of it for weeks after. However, it’s unlikely there’ll be any scraps on your plate left to feed the dogs- it’s delicious. Also check out ‘Bamberger Zwiebel’, local delicacy, an onion shell stuffed with meat. Yes, it doesn’t get more Germanic than this.

There are so many pubs to try it would be impossible to cover these in a few days, but hey, that kind of sounds like a challenge. Who ever complained about a wealth of pubs?

Bamberg belies its size, because so much of its outlying areas are also still really nice. So many other cities you have to break through an outer shell of shit before you reach the stari grad, the stare miasto, the altstadt, etc. Bamberg starts off by being reasonably nice, and gets gradually nicer and more impressive from there. But it isn’t all skirt and no knickers – beyond the painted facades and hours of pleasing wandering there is a buzzing centre with an underbelly full of local life living some of it just as you could imagine hundreds of years ago, but without the witch trials, silly hats and ritual prayer (or so I imagine).

Fly in to Nuremburg and on there to Bamberg, 50 minutes on the train. You simply must pay it a visit, or maybe even make it your new home! Got to be better than Scunthorpe.